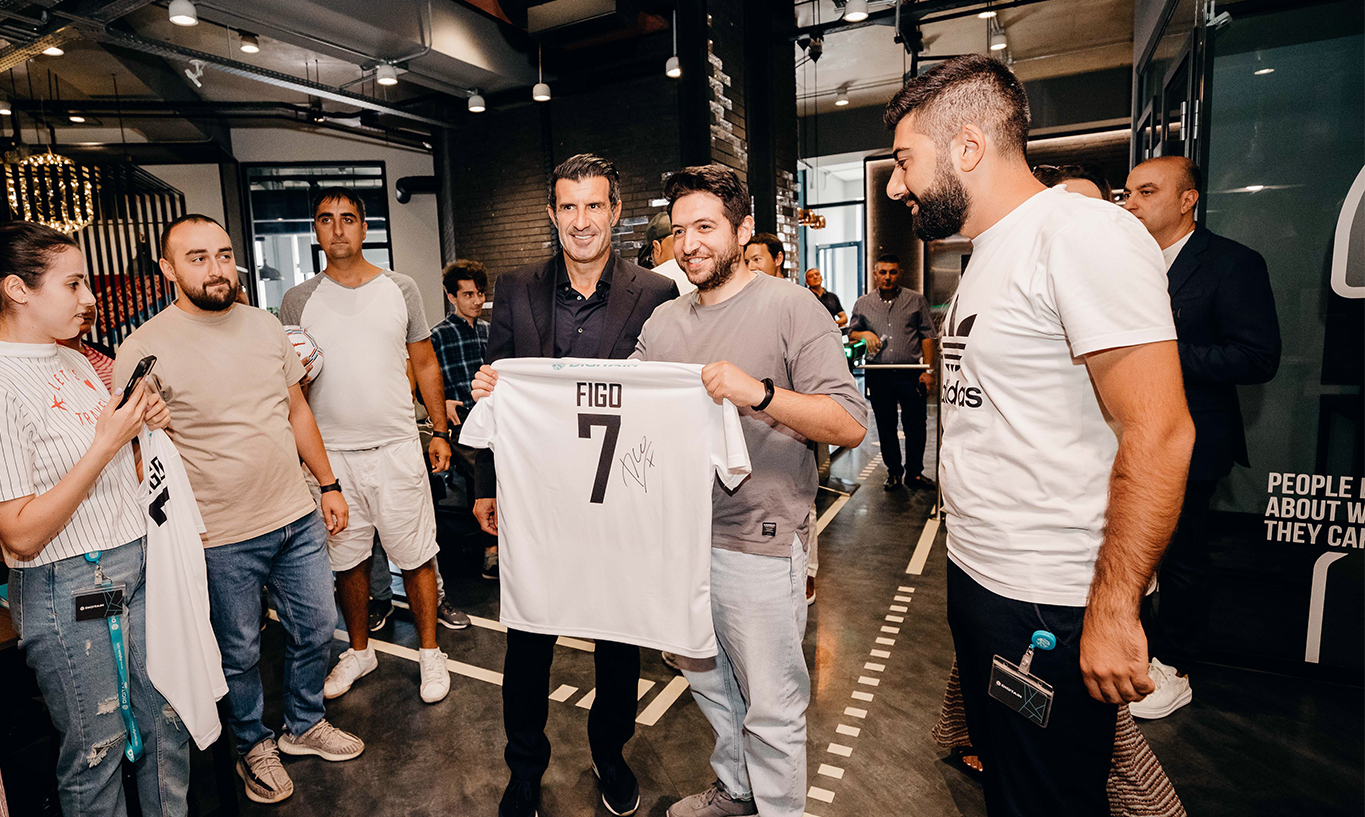 Digitain’s new brand ambassador Luis Figo, the former Barcelona, Real Madrid and Internazionale star, strengthened his ties with the company when he visited its headquarters in Yerevan to meet the team last week.

Securing the services of one of the iconic footballers of his generation is a big statement for a B2B supplier. But Digitain is a company with ambitious plans to continue its expansion into European, African and Latin American markets, and also one that is making significant investments in its future.

It is investing heavily in new products for 2022 and beyond – including the Centrivo platform, a payments gateway, and enhanced live casino and virtual sports offerings – as well as in recruitment and training, and in the creation of an optimal work environment at its purpose-built headquarters.

It was at this state-of-the-art office complex in Yerevan where Figo was to be found causing great excitement last week, shaking hands and posing for countless selfies with members of the Digitain team who were clearly thrilled to meet him (and why wouldn’t they be – it’s not every day that a Galactico pops in to say hello).

At a press conference with the company’s founder Vardges Vardanyan, the former Portugal international came across as a charismatic, funny and well-informed figure as he answered questions from an audience of employees and reporters.

“It’s a great pleasure for me to join the Digitain family and to be here in Yerevan,” he said.

“To tell the truth, when Digitain approached me to be ambassador, I didn’t really have a clue about the company because it’s so far away from where I’m based. I wanted to realise what the company is and, for me, it is really a big surprise because I’m seeing today how many people are here and the happiness of the people receiving me and welcoming me.

“So I’m very pleased to be part of the company and I will try to engage and promote as best as possible, as we have the chance to help the company to grow bigger.”

Vardanyan added: “It is my pleasure to welcome Luís to Yerevan and to Digitain’s headquarters. I am extremely happy that we have a partnership with someone of his international stature and reputation, who shares our progressive values and who can represent the Digitain brand with such assurance.”

While the La Liga and Serie A winner conceded that he knew little about Digitain when he was first approached to become its brand ambassador, as he’s “not so into software and technology and that kind of stuff”, that has changed. During months of talks to agree a deal and work out what his exact role would be, Figo did his research and liked what he learned about the company.

The positive impression was reinforced during his visit to Yerevan, and the reception he received had him looking to the future.

“I always think big, so I expect to be in the (Digitain) family for a long time – this is just a tip for the boss,” the Champions League winner joked.

“The most important thing is that you will be happy with my work. I think we will try to make (the company) known more and more, not only locally, but in other markets and if possible, globally.”

He added: “In the past, when I was active and I was playing, I often had the chance to have these partnerships with companies and I was looking always to have a long-term relationship. It means that you can give and receive in the same way (to create) a win-win situation and establish a good relationship.”

While Figo’s brand ambassador role with Digitain is designed to promote B2B products and services, the role of betting operator sponsorships and partnerships between sportsbooks and former professional athletes in the B2C space has been the subject of much scrutiny in recent times. However, the 127-cap Portugal international believes such deals should be permitted to go ahead as long as the right safeguards are in place.

“I think if everything is healthy and clear and clean, it is good,” he said. “Since a few years ago, you could see sports betting companies sponsoring football and other sports, and I think for the clubs, it is a very important (source of) better revenues and to maybe help them to have better teams and better players.

“UEFA allows the sportsbook companies that are legal to get into sponsorship. I think everyone that is clear and legal has the right to be in this industry.”

Since hanging up his boots, Figo has made the decision to focus on a career in business, rather than follow former team-mates Zinedine Zidane, Pep Guardiola, Raul and Dejan Stankovic into the dugout.

“I have already started to get white hairs,” the Portuguese joked. “Being a coach was a direction that I never wanted to go in. When I finished my career I was so physically and mentally tired after 20 years that I needed to do another thing.

“As a football player, you go to practice and you don’t have to prepare everything. I think it is much more tough (for a coach) in terms of time and quality of life than to be a football player. So I was not prepared for that.”

However, while coaching is not on the agenda for Figo, he believes that his experience of working with some of the best coaches in the game helped him to develop some of the valuable skills he uses in his business career and that learning from them has “helped me to make so many decisions in my life”.

One big decision he made last year was to cooperate with documentary makers Pitch Productions on The Figo Affair: The Transfer that Changed Football, the newly-released Netflix documentary that tells the inside story of his contentious move from Barcelona to bitter rivals Real Madrid. The record-breaking transfer happened in 2000, the same year that he was named the best player in the world, and 22 years on, Figo felt it was right to finally tell his side of the story.

“I wanted to recount my story after so many people talk about it and give their opinion about it. But the protagonist – that was me – never spoke about it,” he explained.

“It’s for the people who are interested in football to watch and form their own opinion. At the same time, it is good because there’s history in terms of transfer markets and in terms of rebalancing between two clubs.

“What’s most important is with my experience to tell my story, my true story of what I did in that moment, and for my daughters, who were not existing in that moment, to see it and know what happened.”

Figo’s work for the day was not quite done as the press conference drew to a close. There was still the important matter of playing for Digitain in a five-a-side match against TotoGaming on the roof of the building that houses Digitain’s 1,000-strong trading team.

The blistering afternoon sunshine and temperature of 38°C may have meant that Figo’s exquisite skills were displayed at a rather more pedestrian pace than when in his prime, but it’s a fair bet that the other players won’t wait 22 years to tell the story of the time they shared a football field with a Ballon d’Or winner.