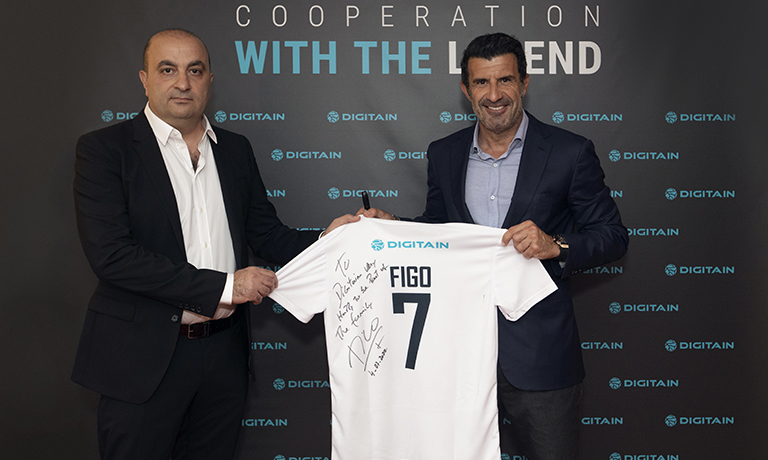 Gambling Insider was in attendance in Nice as Ballon d’Or and Champions League-winning ex-footballer Luís Figo signed an agreement with sportsbook and iGaming supplier Digitain.

Under the slogan ‘cooperating with the legend,’ Figo signed as brand ambassador alongside Digitain Founder Vardges Vardanyan, as the two parties look to embark on a long-term collaboration.

Former Portugal, Real Madrid, Barcelona and Inter Milan footballer Figo praised the values of the gambling company as he held aloft a Digitain shirt with the number seven and his name written on the back.

Promoting the values of a long-term partnership, Figo sat down with Gambling Insider to discuss the deal, as well as reflecting on his playing career.

Figo exclusively told Gambling Insider: “For me, it was important to know a little bit about what the company is doing. It’s a global company and, because it’s a leader in this area, it was nothing but positive when the chance came to accept the partnership.”

When asked by Gambling Insider about the thinking behind the partnership, especially considering the increasing trend of brand ambassadors among B2B gambling firms, Digitain Founder Vardanyan added: “Luís Figo is a living legend. I have much respect for him not only as an ex-professional player but also as a high-profile individual and social ambassador.

“He embodies the values that Digitain aspires to. He played with skill, professionalism and has the same love for the sport we do.”

Look out for the full interview with both Figo in this week’s GI Friday and with Vardanyan in our upcoming Sports Betting Focus magazine.

Figo will also feature in the Play Hard section of Trafficology, looking back on his career and talking football.