Looking To ICE: Predicting The Buzzwords Of 2020 | Part 2 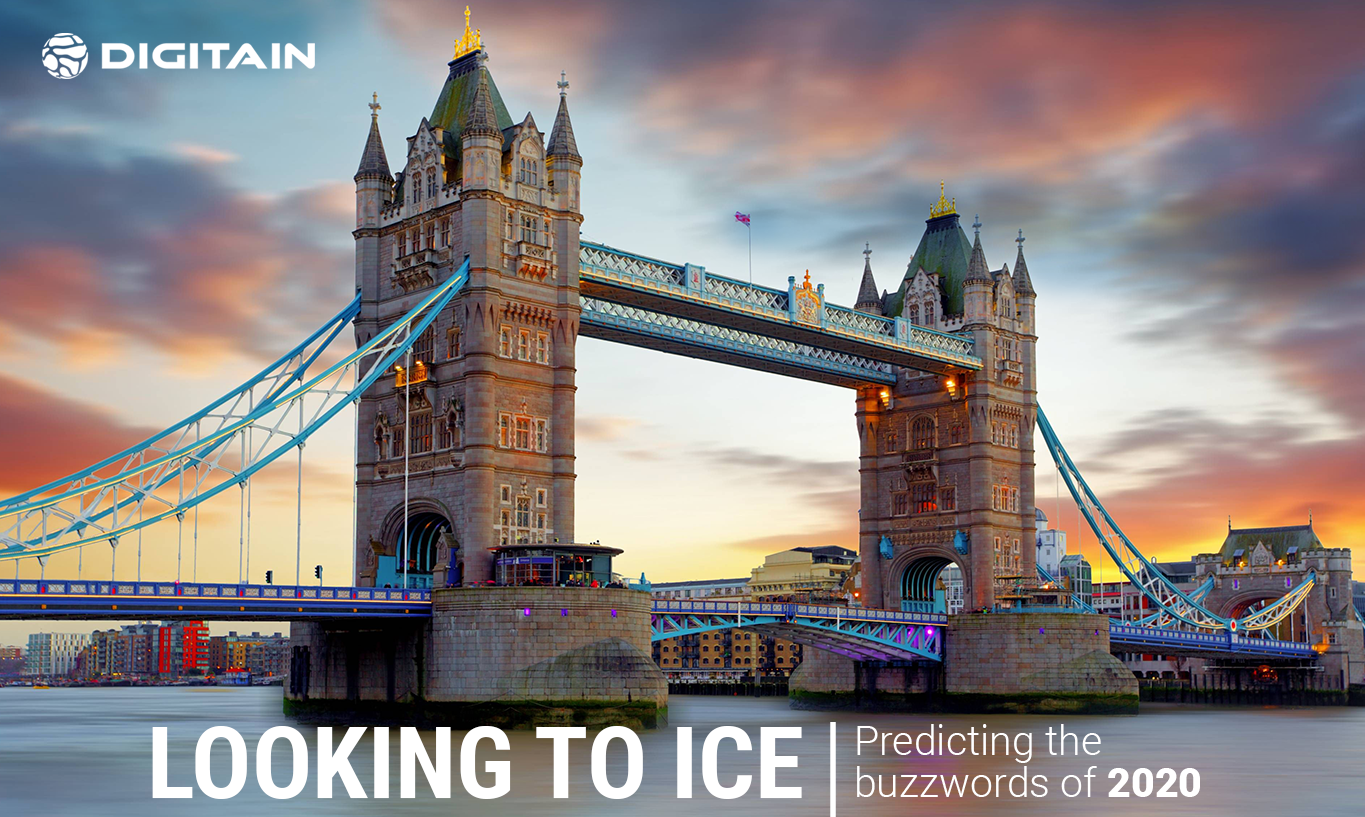 It just wouldn’t be ICE without the industry patting themselves on the back, saying how innovative we are. I take a slightly different view, however. I believe, yes, we are innovative but we can do so much more. Over the last few years we have seen innovation be tied up in words such as gamification and the development of new verticals like eSports. Last year, though, we saw great innovation from companies such as Trustly who introduced their ground-breaking Pay N Play.

ICE was always viewed as the great unveiling of new innovations. However, with the growth of international conferences, some of these innovations are drip-fed to us in the build-up to ICE. At SIGMA, we saw Leander Games launch their Dynamic Ways product which offers up to 117,649 pay lines. Yggdrasil have launched their Splitz product, while I have read good things about Unibo’s products on LinkedIn. All these product launches are leading towards increased player engagement.
Needless to say, player engagement is not a new phenomenon. Way back in 2011 when I was at Amaya, a good friend of mine who created slots told me the key to a good slot is giving the player the belief that their skill was influencing the outcome of the game. One of the more interesting tools we had for player engagement at the time was our Bars N Bells slot – in this slot, if the player had not one anything in four spins, they were guaranteed a win on the fifth Spin. This was interesting because on the fourth spin, the player was engaged to lose because they knew a prize would be guaranteed on the next cycle. Even with the probability of a win on the fifth spin being less than the win occurring on the fourth spin.
Leading the way in player engagement and innovation, in my humble opinion, is a new and upcoming slots provider in Swintt. To me, through their understanding of gamification – shunning the easy route of creating a tournament or simply sticking a leaderboard on a slot – they have embraced gamification at its core. Their product combines contests, achievements, missions and CRM tools which notify operators of players unclaimed rewards or nearly-completed challenges to engage with the player.
This is heightened gamification, only enhanced when combined with Swintt’s Play-it-back elements which bring a charitable element to their content. As they progressive through games, players are able make continued rolling contributions to charity that are tangible and quantifiable. Visual representations of real-life impact represent the driver and differentiation for Swintt’s PositivePlay product. For example, rather than a contribution of revenues from the game going to charity, or being absorbed into a bank account, the contribution could be tracked on bottles of water donated to remote villages in Africa, or shoes bought for children in Bangladesh or, more in line with the zeitgeist, kilos of plastic collected from the ocean.
Swintt are my tip for a company to watch in terms of Innovation in casino gaming, but I also must mention Green Jade Games and their fun coin-tossing game, where the player bets simply on a coin toss of heads versus tails, genius in its simplicity.

To me, ICE 2020 innovation in terms of pure sportsbook will be around the incorporation of AI and sportsbook personalization. I have outlined my thoughts many times on this and for a snapshot, take a look at my recent interview at Betting On Sports. My thoughts here are clear that as industry we can do better in terms of personalization, and AI is a contributing factor here.
Consequently, I believe AI is going to be another core discussion point at the ExCeL. But as I realise I am wittering on already, please click through to my AI blog for more in-depth comment. In short, though, the key learning for me from a recent panel I moderated in Bulgaria (comprised of delegates far more qualified than me in AI) was that we are not just failing to ask the right questions when it comes to using AI but also only harnessing between 5% and 20% of its potential at the moment.
Without wishing to sound like Martin Luther King, I have a dream that one day I will log into a sportsbook and I will arrive in a fully personalised space, solely focused on entertaining me. Mr. Green, way back in 2011, were using AI to promote slots relevant to a player’s history of slots, so this is very possible and does not represent new ground in theory. Digitain’s bet-recommendation engine is the next step that we are taking as a company in this domain, progress which I hope will soon lead to what I will call Digibet.

The first morning of ICE was once always characterised by the latest big Playtech acquisition, which looked to set the tone for the forthcoming year. Now the industry has moved on, with Playtech flexing their muscles less overtly than in the past – and with more and more M&A taking place throughout the year.
This year we have seen Flutter Entertainment merge with The Stars Group – this merger is set to be completed in the third quarter of 2020, with a shareholder vote in the second quarter. NetEnt have purchased Red Tiger, while Sportradar acquired Optima. This trend towards more and more M&A in 2020 is becoming somewhat irresistible, due to the constraints of diversification, operators wanting to own their own software, ramping regulation and higher costs of development. Let’s hope such M&A can increase innovation and enhance the player experience. I remember when the young rockstars of the industry left the corporate companies that they were working for, breathing new life into the slots market, in particular the birth of QuickSpin. Let’s hope from all the cash that is made through M&A this year can promote increasing innovation.
I am not in a position to predict the next big piece of M&A news. Sure, the long-rumoured acquisition of SBTech by Draft Kings turned out to be an open secret, but in an industry of so many moving parts, it’s perhaps best to keep an open mind and only firmly believe something will happen when it is signed in blood. Just think back to when Betfair and Bwin were going to merge, only for Party and Bwin to become bedfellows. That said, it would not be ICE without the rumour, conjecture and rank hypothesizing around who is buying whom.

eSports, is without doubt a growing area of interest and was one of the focal buzzwords as far back as ICE 2017, with a number of different companies hosting small tournaments. The importance of eSports has continued to grow and is offering a new vertical for the next generation of igaming enthusiasts. I have one problem with eSports in that we are told to “trust the game” and if those participating in tournaments find a bug (as happened recently) we are supposed to just accept this… but both teams could have found the bug and exploited this. If I was a customer betting on this personally, I would feel a little aggrieved that my bet was placed without knowing this bug existed, and I could’ve done my dough due to the bug. At least with slots, you know they are GLi-certified in more than cases than not and can play accordingly.
Virtual sports have been a solid driver in the growth of the Southside at ICE and they will remain a key area to watch in 2020. Last year, Global Bet unveiled their Pro Series Football to much acclaim and we have seen Highlight Games launch very successfully in Italy this year, having secured the NBA rights for their basketball product. It is also rumoured that a leading supplier of virtuals, whose chink in the armour had for a long time been a lack of their own proprietary football product, are unveiling their first in-house football product this year. No discussion on virtuals would be complete without mentioning Golden Race who are seen by many as the leader in this field. If gossip is the be believed, they will be launching a new version of their football product at ICE this year, which will combine improved graphics with their market-leading maths models. Elsewhere, don’t be surprised if Pragmatic Play back up their acquisition of VSoftCo last year by launching their own take on virtual sports. When selecting a virtual partner, it is always important not to be blinded by the increasingly life-like graphics on display but to check the maths models under the bonnet provide a healthy beating heart to complement the beautiful graphic creations we see.
My overarching feeling, like many of my school reports, is that we doing are ok but have the potential to do so much better. Let’s hope ICE 2020 can move us from a C+ to B- and possibly with a bit of ingenuity to a solid B. See you all at ICE 2020. And remember, we are an entertainment industry at our core. Feel free to drop by Digitain’s stand at S2-350 to say hi. I look forward to separating helpful reality from the hype and the practical utility from the buzzwords!