Mobile gambling in Latin America. How has the industry changed in 3 years? - Digitain

Mobile gambling in Latin America. How has the industry changed in 3 years? 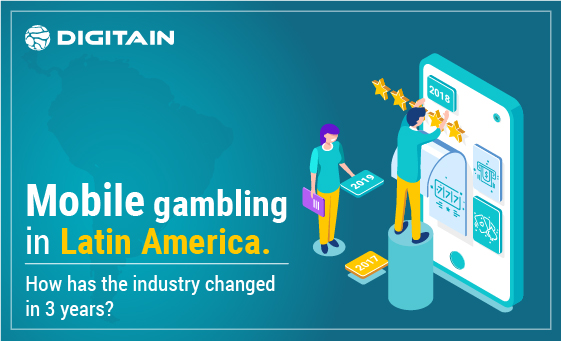 When online gambling software developers consider the next markets, Latin America is rarely their first choice. That’s no surprise since the top countries by game revenue are China, the U.S., and Japan. Truth is, Latin America finished 2018 with 19% growth year-over-year on mobile platforms. And the predictions say that by 2021 there will be over 235 million smartphone users. Latin America is going through a rapid advancement and quickly catching up to global market leaders.

Let’s look at the Numbers

Latin America is comprised of 26 countries. Collectively, it is twice as big as Europe, and has almost the same number of people. And if all countries are consolidated, like the European Union, it would be the fourth largest. Yet it is still off the radar for most online gambling software developers.

Usually, this is due to the fact that there are income disparities and low bank account ownership. These facts, combined with the recent regional economic decline are making doing business difficult. But there’s still good reason for gambling software developers and operators to consider taking their businesses to Latin America. As it seems it will be the next big mobile gambling market.

For one, industry research shows that the LatAm mobile gaming and gambling market will be worth over $2 billion this year, making it over three times larger than Southeast Asia. Additionally, the growth rates are similar for both regions. The growth is expected to continue, even though only something over 150 million of approximately 630 million people have smartphones. The majority of whom reside in Brazil, Mexico, Colombia, Argentina, Chile and Peru.

You need to Invest to Get a Return

In the past several years, Latina America has grown into a potentially huge market, which already accounts for 4 percent of the world’s total game revenue. But research shows that online gambling software developers do not consider this market important and spend less than one percent of their annual ad budget in Latin America.

The key to online gambling growth in Latin America lies in considering it as a region instead of a collection of countries. Mexico has 130 million people and is one of 20 countries that speak Spanish. On the other hand, there’s Brazil, with over 200 million people speaking Portuguese. This fact alone makes it very easy to segment potential players in this region based on language. Meaning Latin America has little of the linguistic complexity of Europe or Asia. Operators’ teams can partner with a local expert in the region and still manage global acquisition campaigns.

Another thing to keep in mind is that you need to appeal to the new generation of gamblers, the ones that prefer online gambling – e.g. millennials (the generation born between 1985 and 2000) who value personalised, innovative online experiences. This is one reason why games themed around a variety of niches are so popular online, providing choice for any type of gamer, regardless of how varied their interests.

Millennials also want to be able to choose between multiple touchpoints. Providing an omni-channel experience that enables playing on desktop and mobile devices is crucial. People in Latin America favour mobile gaming and gambling, the same as in the Western world. It’s just another area online gambling operators should consider when expanding to this market.

Even though gambling restrictions remain in place across the world, governments are beginning to see the benefits of a legal but regulated gambling industry. But until online gambling operators see appreciable change in legislation in the U.S and Europe, they are on the lookout for new opportunities. So it’s no wonder Latin America’s one of their new targets.

With the population of the continent standing at over 600 million, there’s a huge audience out there. And people have a strong appetite for gambling. What’s more, travel and tourism are booming in the region – at a rate of 5.1% per year between 2010 and 2020 – which adds the potential for gambling tourism. While it remains to be seen which online gambling operators and software providers will come out on top, there’s no doubt that large organizations with experience working internationally have a clear advantage.